Awake the monster inside you

Carnival came and with it the question: As what do we dress up???

During my stay in Tomelloso, I have been doing so many things with my host family that I even forgot about the carnival. I spent all my time thinking about those things and forgot the huge festival to be. Eventually, the day came, and my sister and I decided to dress up with a friend as SLEEPMONSTERS.

While Lucia and Blanca wore animal pyjamas, I decided to borrow the bathrobe of my mother and wore a pyjama underneath it. Together we then went on the road to watch the huge carnival parade. Never would I have thought that the parade would be this stunning.

While in my city carnival parades only last half an hour and people barely try their best, people in Spain put all their effort into it and design various costumes matching with the wagons the drive on. It was an incredible scene with great music which lasted for three hours.

The following day the so-called “Peñas” was held. Lucia told me that she has wished to participate in this parade for many years but sadly cannot afford it. The reason is that some of the costumes cost more than 400 euros. Nevertheless, we still had a great second day and met some friends of hers in the evening.

At the end of the carnival, a small mourning procession was held to farewell the carnival. To show the feeling of sadness, people wore masks and wore black clothes. While going through the streets, people followed a car with a big paper fish on it. The last step of the procession was the combustion of the paper fish. While most of the people left after the fish was burned down, some people stayed and cried about the “death” of the carnival. 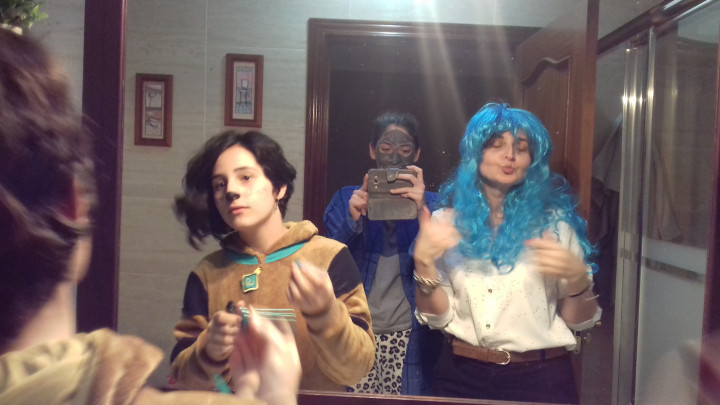 My family and I preparing for the carnival