A short summary of my stay in Tomelloso.

Almost one year ago, I travelled to Spain as an ERASMUS exchange student.

Together with a host family, I stayed in Tomelloso from January to the beginning of March. As a normal student, I started to go to the 1st Bachillerato and enjoyed the evenings with my host family at home. On the first weekend, Lucia (my host sister) had her birthday, which allowed me to meet all of her friends in one place. It was funny to see another culture, especially the pig leg in the kitchen or the thin blankets to sleep with. Every Sunday starting from the first week, my host family and I went to visit their grandfather and uncle at the end of the city. Often, we also went to a popular bakery called Sanchez and consumed small pastries and delicious smoothies.

In the third week, Lucia, her mother, and a friend of hers drove to another city to go pingas (shopping) with me and to show me Spanish fashion. The following weekend my family showed me a wine museum since la Mancha is one of the biggest wine regions of the world, and the typical Bombos (stone houses from people in former times). Things that made my heart skip a beat were the driving lessons of my host brother. Some time passed, and soon we visited Ruidera and Toledo. We booked an apartment in Toledo and spent the whole weekend visiting a cavalry museum and wandering through the city, going into different stores.

Furthermore, we even travelled to Campo de Criptana and studied the molinos (windmills) from Don Quijote. The highlight in these two months was definitely the carnival. To my surprise, they celebrated the festival three days long and had a huge parade each day. The parade on the first day lasted for three hours and concluded beautiful costumes and incredible songs.

It was a journey full of emotions and became a memory that will always stay in my heart. My host family became my second family. A second family to rely on. I already miss them and cannot wait to see my sister again. 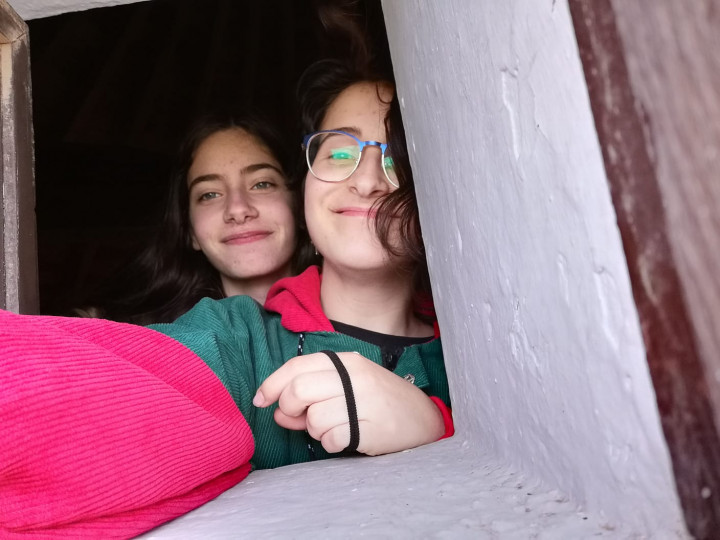 My host sister and I at the top of a windmill